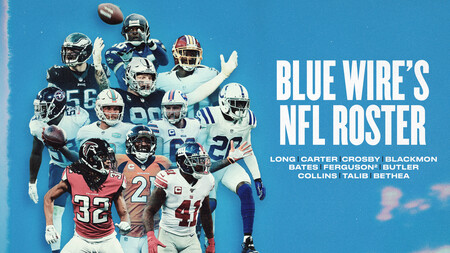 Las Vegas Raiders third-year defensive end Maxx Crosby is making a name for himself both on the gridiron and behind the microphone. In 2022, Crosby will begin hosting a video podcast in Blue Wire’s Wynn Las Vegas studio. After being drafted in 2019, Crosby led his team in sacks as a rookie in 2019 with ten, and while playing through a torn labrum and broken hand in 16 games last season with seven. This season, he can turn it into a three-peat if he beats out his Las Vegas teammate Yannick Ngakoue who currently has 1 sack more than Crosby–six to five.

As a consistent staple of the Blue Wire podcast library, The Green Light with Chris Long continues to sit atop the podcast charts as a top 10 football podcast in America. Chris Long’s ability to offer insight on the NFL and draw on his unique and successful NFL career has allowed him to provide listeners with can’t-miss content since his retirement. Long seems to have the Midas touch, seeing success as a podcaster shortly after the culmination of his NFL career when he joined the short list of players to win back-to-back Super Bowls with two different teams (New England and Philadelphia).

Following the trail blazed by Greg Olsen with his TE1 series, in WR1, Hall of Fame wide receiver Cris Carter interviews both legends and the next generation of superstar touchdown catchers. Joined by the likes of Calvin Johnson, Julian Edelman, Mike Evans, and Justin Jefferson, Carter reveals what makes the position so unique and why all the biggest football personalities seem to be wide receivers.

Whether you’re a seasoned gambler or placing your first wager, Super Bowl champion Will Blackmon has you covered. Drawing on his 12 years of NFL experience, the former safety is now taking a deep dive into the quickly growing world of sports gambling, giving listeners guidance on the best lines, top prop bets, and most intriguing underdogs.

The Ferguson Brothers - After The Snap

Anyone who’s had a brother can relate to the affectionate yet competitive dynamic between co-hosts of After The Snap, Blake and Reid Ferguson. From 2012 to 2019, nearly every single play of the 104 LSU Tigers’ football games was snapped by one of the Ferguson brothers. After leading LSU to a national championship as team captain in 2019, Blake became division rivals with Reid and the Buffalo Bills when the Miami Dolphins selected him as the only long snapper drafted that year. Although they are opponents on the field, Reid and Blake play for the same team when they get behind the mic, providing listeners with the exclusive locker room inside scoop on all things NFL.

Good luck trying to score against these guys. The Man To Man With DB & AB is a “man-to-man” conversation between two seasoned NFL veterans. With 14 years and nine years of respective NFL experience as defensive backs, Antoine Bethea and Darius Butler will keep you covered on everything you need to know in the football world.

Aqib Talib – Call to the Booth

Formerly revered as one of the most feared cornerbacks to line up against in the NFL, five-time Pro Bowler and Super Bowl 50 Champion Aqib Talib brings his unique perspective and outspoken voice to our headphones once a week on Call to the Booth to discuss all major NFL news, match-up analysis, fantasy football advice, and conduct exclusive interviews.

As the two newest pro football talent additions to Blue Wire, Atlanta Falcons linebacker Daren Bates and Toronto Argonauts cornerback Jalen Collins always keep it real in the Raw Room. On the pod where there’s “No Cap Allowed,” the pro athletes give their authentic and unapologetic takes on a myriad of topics in sports, culture, and current events.