The Come Up Season 2 Debuts on Snapchat 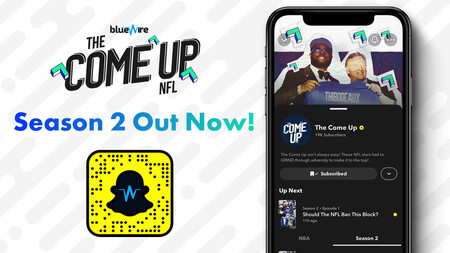 Blue Wire’s award-winning episodic Snapchat series on athletes who have overcome mountains of adversity on their way to the top, The Come Up, has dropped the first episode of its second season on August 23rd.

Season 1, which won a Silver Telly Award for Best Social Video Series in 2021 and snagged a Hashtag Sports Award nomination, featured the inspiring stories of NBA superstars overcoming humble beginnings to reach superstardom. Take Luka Dončić, who took the reins of Real Madrid despite being the youngest player in the club’s history, and ended up winning Euroleague MVP in the process. Grizzlies superstar Ja Morant is known for his blazing finishes at the basket and high-flying slam dunks, but it wasn’t until his father had him practice his leaps with a massive tractor tire that he became the athlete we know today. Donovan Mitchell had the basketball pedigree of a superstar and was barely a lottery pick on draft night, but went on to show how wrong his doubters were.

The Come Up’s second season chronicles the stories of this season’s NFL rookies so far and provides a window into their motivation, and what drives them further on the path to greatness.

“Our team is excited to launch Season 2 of The Come Up on Snapchat ahead of the NFL Season,” says Blue Wire’s manager of video production Dominick Muccilo.  “The show will explore their youth, overcoming doubters, and crowning moments on their way to the National Football League.”

Season 2 will focus on the come up stories of rookies including New York Giants’ 5th overall pick Kayvon Thibodeaux, the first quarterback drafted by the Steelers since 1997, Kenny Pickett and Eagles’ speedy defensive tackle Jordan Davis.

Check out the first episode of Season 2 here, and subscribe to follow the whole series here to catch new episodes every week!