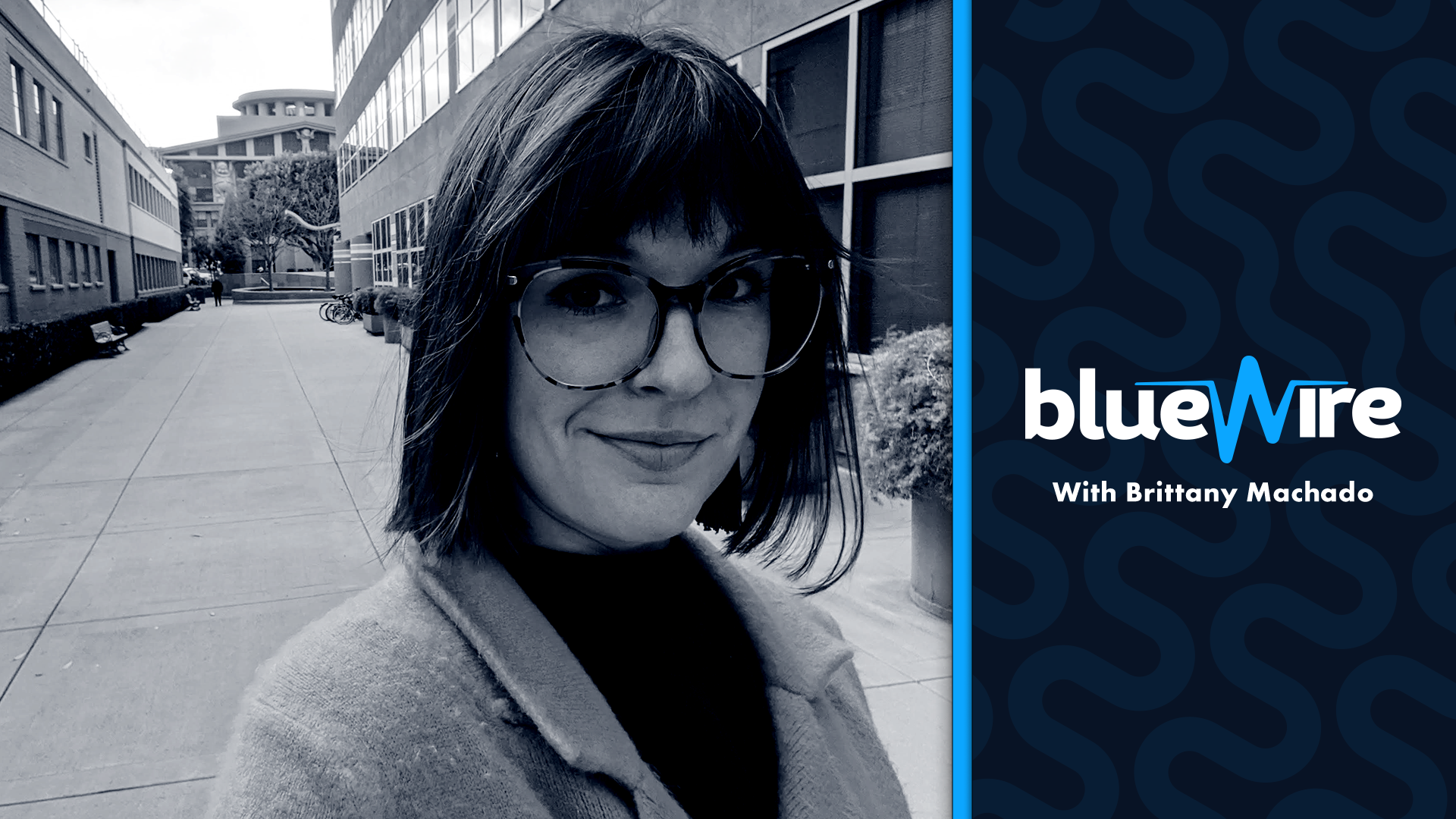 We recently had a chance to sit down with one of Blue Wire's most important people, Brittany Machado. After being hired in April, Machado has helped to lead the effort for Blue Wire's Series A funding, along with helping to hire some of Blue Wire's latest new hires. We discuss this and more below.

Luis: I’m sorry to make this sound like a job interview, but why don’t you start by introducing yourself

Brittany: Yeah definitely, I Went to LA for school, and never really left, except for some time in Chicago for grad school. I started my career in sociology working in public policy and race and representation in politics and then I accidentally found my way into entertainment by producing a documentary that was based on my (masters) thesis and you know I fell in love with that and I thought ‘this is a lot more exciting than what I’m doing currently’ and I started my career as the second post production assistant on the NBC show “Grimm” and just went from scratch and from there I went and I started working in talent development at Warner Brothers working on their pipeline on the television side and while I was doing that my boss got recruited to work in a digital studio and so I ended up building out a lot of the operations for that side and kind of building a little indie studio within Warner Brothers so that was exciting and then from there, Sundance recruited me to build out Sundance Collab which was a new digital learning platform and so I brought that from pre-green light, to green light, to the world and so I love doing that and then I was working consulting for a while, private consulting, and then I eventually made my way over to Blue Wire when I pitched them the Abner Mares show, which they bought

Luis: OK, so that was kind of like your segue into the company?

Brittany: Yeah, my segue into the company. Yeah, I found Kevin online and I got in touch with him, he had just closed the seed funding for the company at the time and so he thought that the Abner Show was really interesting. I pitched it as a bilingual podcast and he made a deal with it, and then he said ‘hey why don’t you come into studios and work as a consultant and help build that out?' and I went from studios into business affairs and now I’m leading our business operations with overseeing our business affairs and our people division

Luis: How long have you been with the company now?

Luis: Oh ok, so you just got in then.

Brittany: I just got in, it feels like it’s been the longest (but) shortest time, which is what happens when you’re in the space-time-continuum of a start-up

Brittany: I had only met, up until a few weeks ago, when we had a meeting here in LA, I had only ever met Peter Moses in-person, I had not met anybody else in-person, and so it was just working remotely. I’m used to working remotely with international teams, but I do miss that kind of in-person energy, but the benefit of coming in during the pandemic was that we were able to just make sure everything started, that’s when the company really started taking off, so you know we are, it’s just kind of in our DNA that we work remotely, and that’s been such an advantage to bringing in our podcasts into production and thinking about how we can do things in a really creative and efficient manner.

Brittany: I don’t have one, I don’t have a typical day. Sometimes I’m surprised when I’m talking to my partner at the end of the night (saying) ‘oh yeah and then that thing happened, and then that thing happened,’ they’re completely different things so my day can be anything from reviewing and working with our lawyer on contracts and deals, to helping develop ugly sweaters for our staff Holidays, to interviewing candidates, to working on the coding and building out of new tools for our HR Department, it could be anything, absolutely anything.

Luis: Doing all that stuff, do you have like a favorite thing to do typically, if there even is any routine thing?

Brittany: No I like doing lots of different things, I like talking with people and I then like going deep into analysis, I like doing the whole spectrum of it which is why this job is such a pleasure for me.

Luis: Obviously you’ve only been there since April, but have you noticed any big changes since you’ve started? It seems like a lot has happened just in the time I’ve been here, so I could only imagine since April.

Brittany: Kevin likes to call the company a rocket ship and I would say that’s a very apt description of it. Between when I started in April and today, we not only launched our studio and launched our white label services, but we closed an enormous amount of revenue and landed Series A funding that’s allowed us to scale the company to just a totally new stage of maturity, so it has been rapid, the change has been rapid.

Luis: What exactly is that Series A? Because I’ve heard that being talked about so much around the company, could you explain it a little bit more?

Brittany: Yeah so Kevin found investors earlier this year, to get what is called ‘seed funding’ which is basically money from mostly venture capitalists who say ‘we think Blue Wire is a great idea, and we’re going to give you enough money for you to get it off the ground and prove the concept.’ So that’s what a company is supposed to do with their seed funding. Once they start proving the concept then there’s better buy-in and you need to find the next round of capital to kind of take the company to the next level. So you go and start fundraising for your Series A, and some companies do Series A, Series B, C, D you know that can go on where sometimes the company sells or the company folds or whatever. So, we’re going into our Series A, which is a signal to the marketplace that Blue Wire is the real deal.

Luis: What’s that experience been like? Trying to get that done and working with everybody on it?

Brittany: Everyone is wearing a lot of hats and just performing at a really high level. I mean to have everybody contribute really in meaningful waves and just helping to push all the millions of little pieces that are required to get to that, it's been all hands on deck and you just have to cooperate and work some long days and hopefully have some fun while you’re at it, because you're raising money so you can make cool podcasts.

Luis: What’s your relationship been like with Kevin? How has that been since you started?

Brittany: Yeah, KJ is amazing and he has got incredible instincts and he is just an incredible operator, and so I think our relationship has been a really healthy and happy one, because we really seek to benefit the company and we understand each other in certain ways where we (have) complementary skill sets, and we can help to bring the company into his best expression

Luis: So, I’ve noticed that a lot of the people the company has hired, it’s been a very diverse set of people, is that something you guys emphasize on or is it coincidental?

Brittany: No that’s very intentional. One of my KPI’s that I set for myself, (with) my background in sociology, and I know that having different points of view, different points of background, different ways of doing things make an organization’s culture better. It’s better for people, it’s better for business so I have been driving some really aggressive goals, and set standards for how we are making at least 50% of all of our department comprised of people from underrepresented groups, especially in sports media and looking at talent recruitment and implementing procedures in the interview process so that we're as much as possible reducing our implicit bias so that we can not only find the best talent but also not replicate the problem of different sports media companies, which is just being way too homogeneous.

Luis: Is that a concept you think will spread to through the sports media industry as a whole?

Brittany: I think that it’s starting to take hold a little bit. You’re starting to see some sports media companies looking around as they’re facing lawsuits, negative culture and all that. I’ve said to KJ that my goal is to make sure that we don’t have to fix things. It’s that we do things right form the jump which is to understand what our blind spots are and build out a stronger business through multiculturalism. Blue Wire is the future. We have an opportunity now to build it the right way and we’re just trying to do that. Sports media on the ground has changed, and Blue Wire is at the front of where sports media is going to, which is an incredibly diverse fanbase.

Luis: Do you think that podcasting is something that more and more companies are going to try out? After seeing something like Blue Wire finding success and maybe telling themselves "Hey maybe that’s something we can replicate?”

Brittany: Yeah, everybody wants to be in podcasting. Podcasting is a massive growth industry overall I think that audiences, and with all the people trying to get a piece of the market, it’s only going to get more competitive overtime

Luis: I’ll wrap up with this, I noticed the other day you sent out an email to all the employees telling them to basically go out and vote and take some time to research. How important was that for you and the company as a whole to get people out to go vote?

Brittany: I think voting’s really important, no matter what your political beliefs are. People should care what happens in their communities just the same way we care what happens inside of our companies. So yeah, it’s not just because I came up working in exit polling and in policy, but it’s because I think it is important. What we’re really trying to foster in terms of our culture at Blue Wire is being good members of our communities, and I think voting is a good way of doing that.