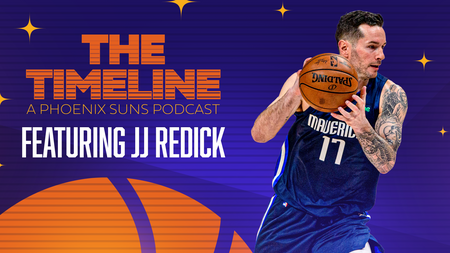 The creators and podcasters throughout the Blue Wire podcast network continue to showcase their penchant for thorough analysis, building dedicated communities of passionate listeners, and conducting strong interviews with high-profile guests.

For all the above, look no further than The Timeline, a Phoenix Suns podcast hosted by Mike Vigil and Sam Cooper. With over 220 episodes, Mike and Sam have been covering the Suns since they were one of the worst teams in the league all the way to their current iteration as a contender, with guests like Kevin O'Connor and J. Kyle Mann from The Ringer, and Blue Wire’s own Matt Brooks. In their most recent episode, Mike and Sam were joined by former player, ESPN analyst, and host of The Old Man and the Three podcast JJ Redick.

According to Cooper, Redick’s appearance on the show is “crazy that it even happened” with Mike adding “it’s very cool for us.” Redick has wasted no time since his retirement in making waves as an NBA analyst, whether on his podcast or on ESPN. You can hear it all on full display with Mike and Sam as they break down X’s and O’s, the most exciting teams in the NBA, as well as JJ’s own experiences playing with and against Chris Paul, Devin Booker, Monty Williams and others around the league.