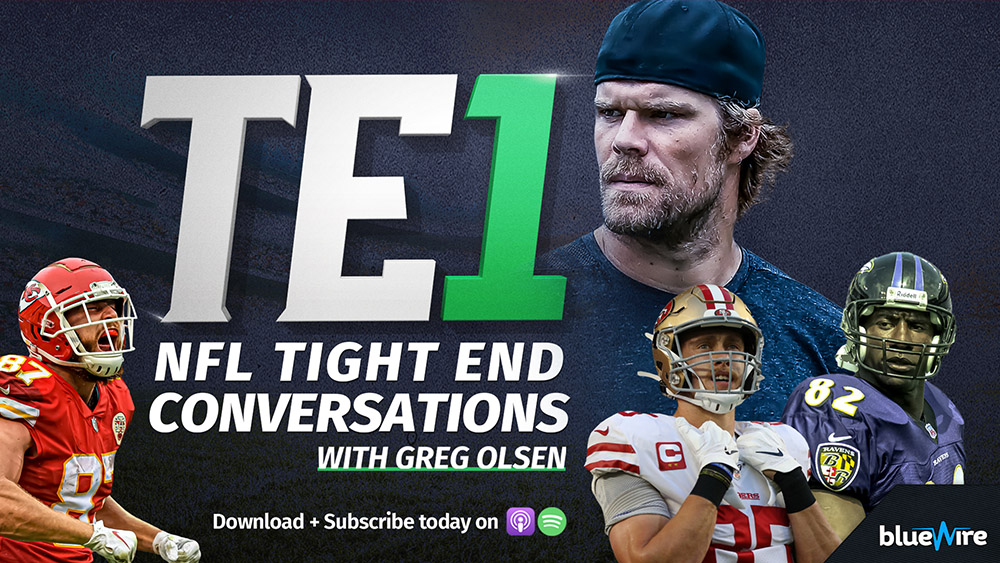 Greg Olsen is joining Blue Wire with his new mini-podcast series on the network called “TE1” that will air later this summer. This seven-episode series will chronicle the evolution of the tight end position in the NFL over the last 60 years through Olsen’s interviews with some of the most influential players to ever play the position.

The series has raw and honest conversations with some of the greats like Shannon Sharpe, Rob Gronkowski and Tony Gonzalez that you won’t be able to find anywhere else. He also dives into the development of the position over time in his discussions with former Bears TE Mike Ditka talking about what is was like to play tight end in the 60s and Bears Rookie TE Cole Kmet on the modern style of the position.

“As we release our first batch of original content, I’m grateful that Greg took a chance on us,” lead producer Peter Moses said of the project.  “Our sole focus was to put him in the best position to succeed throughout production. Greg made that easy with his completely affable and selfless approach. The quality of any podcast rests largely on the shoulders of the host and I couldn’t be more excited to see Greg thrive in this show. This dude has a long second career ahead of him in the media and we couldn’t have picked a better person to collaborate with.”

Olsen is the latest in a growing list of current and former athletes who have chosen to work with Blue Wire including Baron Davis, Megan Rapinoe, Ian Happ, and more. Olsen previously served as a studio analyst for the XFL in 2020 and auditioned for the MNF color commentator position before returning to the NFL on a one-year, 7 million dollar contract with the Seattle Seahawks.

In an interview with the Washington Post about the project, Olsen said, “Twenty years ago there were very traditional media outlets. There weren’t a lot of seats on pregame shows and broadcast chairs. With digital and podcasting and the amount of radio outlets — traditional stations but with satellite radio — there’s a billion ways to get your voice out. Guys are seeing those outlets and taking advantage.”

Blue Wire is now giving athletes an alternative to the big media companies. If you want your voice heard, Blue Wire can provide the resources and guidance to create something special.  The full “TE1” series will be released later this summer. For more updates, make sure you are following Greg Olsen on Twitter @gregolsen88 and Blue Wire @bluewirepods.