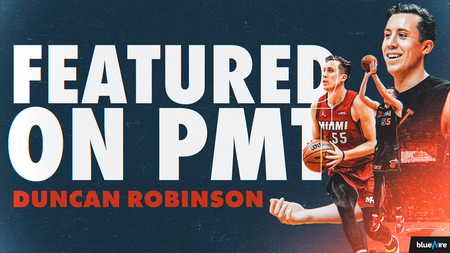 Earlier this month, Duncan Robinson and Davis Reid of Blue Wire’s The Long Shot podcast made a crossover episode with Barstool Sports’ Pardon My Take podcast. The first half of the podcast appeared on PMT’s podcast feed, with Big Cat and PFT Commentor joining for a Part II on The Long Shot. Both recordings took place in Barstool’s New York studio.

On Pardon My Take, Robinson and Reid discussed their perspective of Heat culture with coach Erik Spoelstra, Duncan working on his game beyond shooting over the course of multiple offseasons, and their takes on the NBA season so far before discussing the creation of The Long Shot.

In Part II, Robinson and Reid shared their perspective about creating a podcast, how the pair met in their prep school days, and how difficult it is to schedule a professional athlete for an episode before transitioning to a discussion about storylines around the NBA.

Robinson, a three-point sniper for the Miami Heat, and co-host Davis Reid began The Long Shot back in January of 2021, where they’ve been uploading weekly episodes featuring interviews with fellow NBA players, journalists, and big names in the podcasting space like Big Cat and PFT Commentor. Check out the show here.