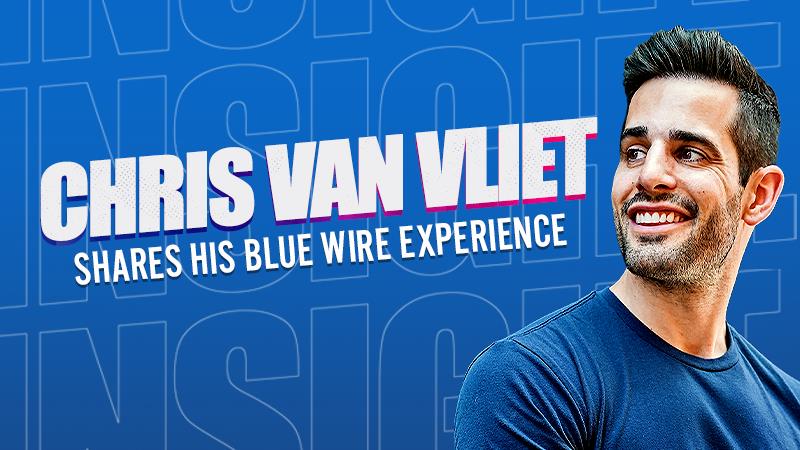 Chris Van Vliet is a leader in all areas of the digital space. Combining his passions for creating engaging content and delivering it to listeners, he started his podcast “Insight with Chris Van Vliet” in June of 2019, joining the Blue Wire network in August of 2019 shortly after his launch. Today, Chris’s show is one of Blue Wire’s largest success stories, attracting tens of thousands of listeners each week, and acts as a testament to Blue Wire’s ability to help guide, grow, and support podcasts and creators.

“With podcasting, it’s so difficult sometimes. It’s literally just you, a mic, and a webcam, especially in this pandemic world right now,” Chris shares candidly in his video testimonial. “It's nice to be able to have other people supporting you and cheering you on along the way. That’s what Blue Wire’s been.”

Chris began his career working as an entertainment reporter for different TV and radio outlets, accumulating more than 15 years of broadcasting experience and winning 4 Emmy Awards. Originally wanting to share his full-length interviews as opposed to solely the clips used in the press, he began his YouTube channel in 2011, which now boasts over 100 million views. The explosion of YouTube and the new demand for specific kinds of content in those following years inspired the entrepreneur to start his weekly podcast in which he interviews celebrities, top athletes, and entrepreneurs with the goal of delivering their expertise to listeners. These in-depth conversations provide listeners with the ability to develop their own mindsets and habits, applying the takeaways to improve their own lives.

“They’ve been so helpful in guiding my show,” says Chris about Blue Wire “This exact same time last year, I had about half the downloads. And that's a huge testament to how successful everything we've done at Blue Wire has been.”

Blue Wire’s impact goes beyond simply selling ads - Blue Wire works to foster community amongst the network and provide resources to hosts to unlock the full potential of their shows. Check out Chris’s full testimonial below.