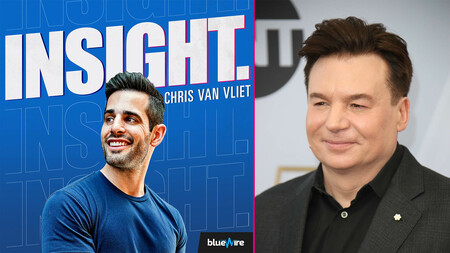 This week on Insight with Chris Van Vliet, Chris met with actor and comedian Mike Myers to discuss his new Netflix series, THE PENTAVERATE, and extract some wisdom all listeners could use in their lives.

Every interview on Insight with Chris Van Vliet is rooted in hearing the advice of those that are the best at what they do, and ultimately what we can learn from it. Mike Myers shared the advice he received that helped propel him to stardom, “Never give up,” he shared. “The reason that you should never give up is that great reviews are just comfortable information. Bad reviews are just uncomfortable information, but none of it is definition. If you make something that you want to see, then you have already won.”

The episode goes into detail on how Myers gets into character, how Martin Short inspired him, the biggest misconception about Canadians, what it's like sharing the same name as Michael Myers from the Halloween movies, why he loved working with Dana Carvey and he does some of his famous voices like Dr. Evil, Austin Powers and Wayne Campbell from Wayne's World.

From Shrek to Austin Powers, Mike Meyers is a legend 🍿@ChrisVanVliet got the inside scoop on how the actor prepares for each role

Insight with Chris Van Vliet is published multiple times a week and highlights the mindset and unusual paths to stardom of some of the world’s most influential and recognizable figures. The podcast has featured world-class athletes such as Richard Jefferson and Lolo Jones as well as household names in the world of acting including Craig Robinson and Mike Myers.

Subscribe to the show here for more incredible interviews.