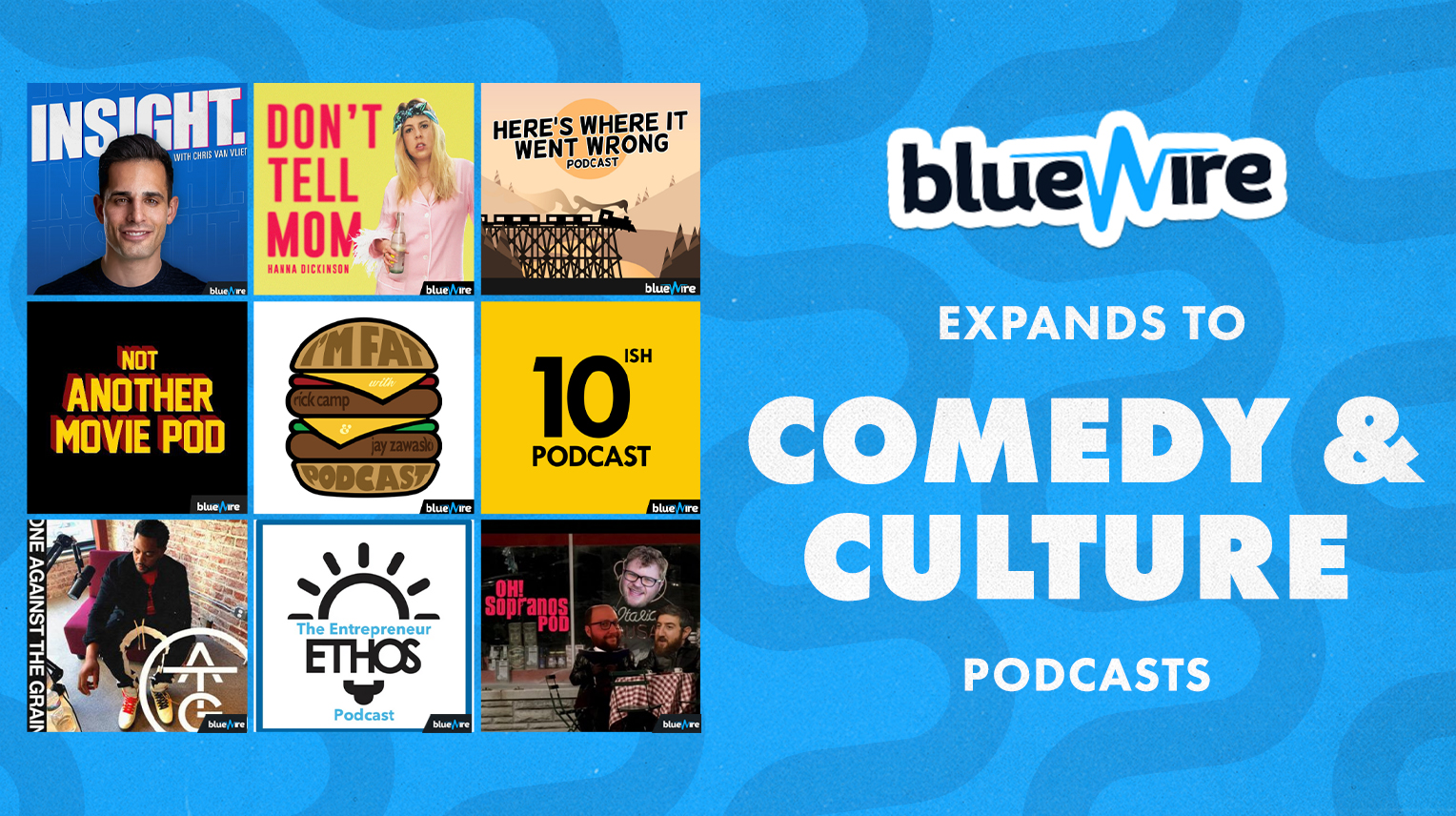 Blue Wire is continuing to broaden its ever-growing network of shows with non-sports focused content ranging in topics from business to pop-culture. In addition to the extensive catalog of sports-centered shows, these podcasts are Blue Wire’s latest foray into a larger range of genres. Here are some examples of Blue Wire's expanded content offerings:

Brought to you by comedians Andrew Nadeau, Wen Powers, and David Saliterman, “Here’s Where It Went Wrong” dissects the worst of the best, trying to figure out where exactly everything went wrong with just about any topic you can imagine. Featuring a different guest each week, the group covers the absolute worst parts of all their favorites - including (but not limited to) the film franchise Alien, labor unions, The Simpsons, grunge music, Star Wars, political scandals of the past 200 years… the list goes on. “Here’s Where It Went Wrong” is a hilariously interesting and engaging way to learn about every facet of pop-culture, sports, history, and more.

As the title suggests, “Don’t Tell Mom” is the show where comedian Hanna Dickinson “talks about sh*t her mom does not want to know.” Hanna and her weekly guests - which often include other female comedians - leave little to be imagined, hilariously discussing the latest in celebrity drama, candid sex stories, dating app endeavors, and everything (and anything) else she would not want her mom to be listening to.

In their own words “Not Another Movie Podcast” is, “a group of dudes talking movies the way you would with your friends.” The show is a can’t-miss for film and television lovers with weekly episodes covering everything you need to know in the worlds of Star Wars, MCU, GoT, and DC, amongst others. Combining comedic and analytical elements, the hosts end each episode with an in-depth discussion or review of their recent watch. As a five star review reads, “If this podcast had video, it would look like the circle convos in the basement of That ‘70s Show.”

“OH! Sopranos Podcast” details the journey of three men as they watch and discuss the iconic television show The Sopranos episode-by-episode. As a 5 star reviewer writes, it’s the “perfect mix of humor and smart discussion to listen to while you binge the series again.”  Or, this can be your incentive to start the show for the first time and catch up along with the hosts past episodes.

For the food enthusiast, the “I’m Fat Podcast” is a weekly show bringing you conversations on different food and “the world of fat,” as their Twitter reads. Chicago based duo Jay Zawaski and Rick Camp co-host, sharing their experiences with a lot of laughs mixed in along the way.

A YouTuber with over 98 million views, an Inc. 500 entrepreneur, and a 4-time Emmy Winning TV host, Chris Van Vliet now adds to this list host of Insight, a podcast featuring weekly appearances from celebrities, top athletes, and entrepreneurs with the goal of delivering their expertise to listeners. These in-depth conversations provide listeners with the ability to develop their own mindsets and habits, applying the takeaways to improve their own lives.

Have you ever wondered about the best MTV music videos? The best and worst ever teams in a Super Bowl? The highest grossing animated film franchises? Look no further than the “10ish Podcast”, which brings you a top 10(ish) list every week. Complete with hot takes, trivia, and fun facts, these weekly episodes will expand your knowledge on every topic in the book.

On “One Against The Grain”, barber to the stars Brownie Blendz covers culture, entertainment, sports, and everything in between. This weekly show is your one stop destination for staying up to date on everything going on in the world of sports and culture.

For those looking for impactful, stimulating conversations, entrepreneur and author Jarie Bolander’s podcast “The Entrepreneur Ethos” dives deep into how successful entrepreneurs have created their independent lives. With a different guest each week, Bolander explores the beliefs, traits, and values that define their lives, as well as what listeners can take away from them and implement in their routine. Guests have included Respona CEO Farzad Rashidi and Metal Rock Singer Johnny Crowder amongst many others.

These shows all join our sports-culture crossover podcasts, including Big Screen Sports, Super Hoopers and 52 Weeks Of Hustle. Blue Wire is committed to being one-stop shop for the new age content consumer, and the "microphone" for underrepresented voices in all categories of content.