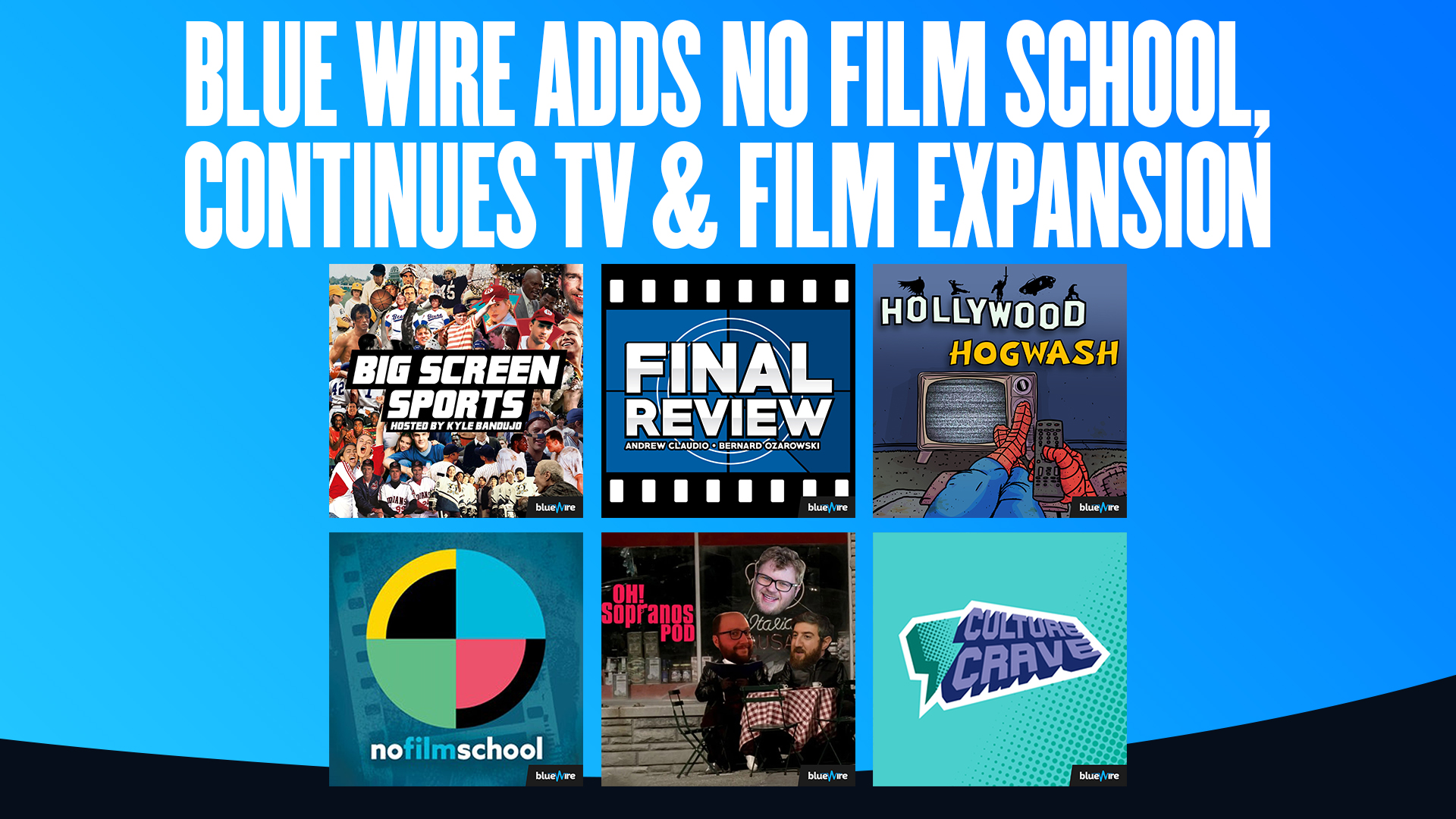 Blue Wire is excited to welcome the “No Film School” podcast to the network as we continue to expand on our film and television content offerings. From interviews with industry leaders, comedic reviews, and even a look at the sport's cinematic universe, Blue Wire is dedicated to providing podcasts for every listener. Read more about Blue Wire’s current film and television offerings below.

The newest addition to Blue Wire’s film and television podcasts, “No Film School” is the ultimate tool for listeners looking to build a career in filmmaking. Covering everything from lighting and cameras to producing and screenwriting, every week hosts share everything you need to know about working in film and TV. The show often features leaders in the industry, interviewing guests in all areas of the business to provide listeners with as much information as possible. Most recently the podcast featured conversations with actors Jake Gyllenhaal and Justin Long, as well as Linus Sandgren, cinematographer of No Time To Die. They are dedicated to making knowledge accessible, “No Film School” required.

In their own words “Culture Crave” is, “a group of dudes talking movies the way you would with your friends.” The show is a can’t-miss for film and television lovers with weekly episodes covering everything you need to know in the worlds of Star Wars, MCU, GoT, and DC, amongst others. Combining comedic and analytical elements, hosts Zach Williamson, Ross Cutsforth, and Luke Goessens end each episode with an in-depth discussion or review of their recent watch. As a five-star review reads, “If this podcast had video, it would look like the circle convos in the basement of That ‘70s Show.”

“OH! Sopranos Podcast” details the journey of three men as they watch and discuss the iconic television show The Sopranos episode-by-episode. As a 5 star reviewer writes, it’s the “perfect mix of humor and smart discussion to listen to while you binge the series again.”  Or, this can be your incentive to start the show for the first time and catch up with the hosts past episodes.

Hosted by Andrew Pisano of the “What’s Wrong With Wrestling?” podcast, “Hollywood Hogwash” brings the same hilarious energy as they give their comedic takes on the entertainment industry. Just in time to start your week, every Monday morning Pisano covers and recaps all the news, rumors, and reviews surrounding the entertainment industry, the latest blockbusters, and popular television shows. Check out their most recent episode, reviewing Dune here.

Just as the name suggests, “Big Screen Sports” brings sports and movies together, diving deep into the best and worst in the often-overlooked sports movie universe. Every week, Kyle Bandujo breaks down a sports film or list, recapping the best moments, the actual on-screen sports, and everything that worked - or didn't. Bandujo is often joined by guests relating to the film or industry, and also does a monthly non-sports episode covering a move their patreon subscribers decide on. A 5-star reviewer writes, “Never did I think I’d find a podcast about three of my favorite things: Sports, movies, movies with sports… Such a unique topic and one that hits me directly in the interest. The easiest 5 stars I’ve given. Outstanding!”

For the cinephile, “The Final Review” only reviews the best of the best films - the all-time greats. To be eligible for review by hosts Andrew Claudio and Bernard Ozarowski, a film must meet two of their three standards: certified fresh on rotten tomatoes, nominated for at least one Academy Award, or grossed at least 100 million dollars at the domestic box office.  Join the hosts each week for a unique look at some classic films.