5 Years of Burn It All Down 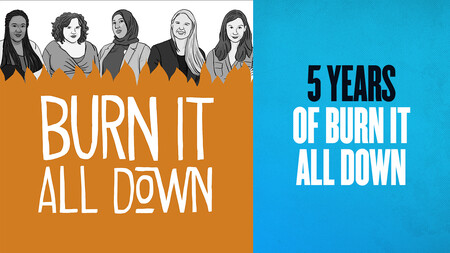 Blue Wire’s feminist sports podcast Burn It All Down celebrated its fifth anniversary last month, with hosts Shireen Ahmed, Lindsay Gibbs, Brenda Elsey, Amira Rose Davis, and Jessica Luther recording the show’s 250th episode reflecting on their favorite memories, messages, and how the show – and sports as a whole – has evolved in the past five years.

Since its inception, Burn It All down has broken down the week in sports and culture, highlighting and dissecting important events and moments for listeners. Often featuring notable guests, the hosts dive into all thing's sports, while focusing on exploring the role of women on and off the field within the sports community.

To celebrate the podcast, we asked the hosts to share their favorite episode from the show – read below to see their picks.

Brenda: My favorite episode depends on when you ask me. Right now, I am writing about sexual violence in sport. I think we don't hear enough about the relationship between corruption and sexism, so I am loving Episode 190: Cheating, Lying, Stealing: Corruption in Sports. As we look toward Qatar 2022 and the sportswashing that we will endure, I think it's such an important topic to revisit.

Lindsay: My favorite episode is also one of our toughest episodes — Episode 31, where I interviewed Rachael Denhollander and Marisa Kwiatkowsk, “The Women Who Brought Down Larry Nassar.” I think it showed how we lead the way in tough conversations by looking behind the scenes and by processing the information in real time with our listeners.

Amira: One of my favorite episodes is from June 2020. It was a special episode I put together called “Black Women Athletes Speak Out,” where BIAD checked in with 11 black women athletes, passing them the mic and holding space for their voices, emotions, stories, and experiences as they navigated the wake of George Floyd’s murder and the reactions to it. It’s a favorite for me because it showcased a wide range of athletes using their platforms in different ways to process and challenge injustice.

Jessica: I love Episode 71: Kaepernick and Nike, the colonization of surfing, and an interview with Bonnie Tsui, specifically the segment on surfing. I was on the show that day, you hear my voice throughout except during that segment. And I remember sitting there listening to my co-hosts say the smartest, most interesting stuff about the history of surfing, the impact of colonization on the sport, and how surfing became a branded, institutionalized sport. I learned so much that day and I felt so lucky to be a witness to it.